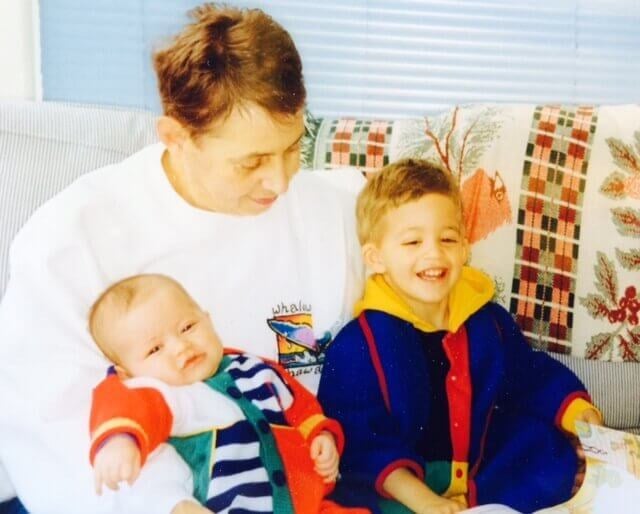 Abuela Carmen with Siena Canales and her big brother, Diego; Siena was too young to be vaccinated.

In a recent article* on the outbreak of measles, an anti-vaccine mother said, “I actually think it’s healthy for children to get childhood diseases.” She’s in good company. In areas of Sonoma County, 20% of incoming kindergartners aren’t fully vaccinated, and in two schools in the western part of the county, that number jumps to 40%. My brother-in-law, Fernando, had one of those childhood diseases. When he was six years old, before the vaccine was available, he developed a severe case of the mumps. Within days he went from being a healthy little 6-year-old boy to lying comatose in an intensive care unit with mumps encephalitis (inflammation of the brain). Encephalitis can also occur with measles, the other “M” in the MMR vaccine. The famous children’s author, Roald Dahl, (Charlie and the Chocolate Factory, Mathilda, Fantastic Mr Fox, James and the Giant Peach, The BFG) was intimately familiar with the danger of measles encephalitis. In 1986 he wrote a plea to British parents to vaccinate their children, recounting his own experience in 1962 before the vaccine was widely available. Here’s what he wrote: Olivia, my eldest daughter, caught measles when she was seven years old. As the illness took its usual course, I can remember reading to her often in bed and not feeling particularly alarmed about it. Then one morning, when she was well on the road to recovery, I was sitting on her bed showing her how to fashion little animals out of colored pipe cleaners, and when it came her turn to make one herself, I noticed that her fingers and her mind were not working together and she couldn’t do anything. ‘Are you feeling all right?’ I asked her. ‘I feel all sleepy,’ she said. In an hour she was unconscious. In twelve hours she was dead. Like Olivia, my brother-in-law, Fernando, worsened. As his brain shut down, the priest gave him his last rites. On that sad day, my husband, then just eight years old, said good-bye to his little brother. But unlike Olivia, Fernando survived. His brain swelling made his thinking foggy for a year, and a damaged cranial nerve left him cross-eyed, but he lived. Fortunately, an eye surgeon straightened his eye, and a year later, he was back to grade-level in school. Fernando went on to become an All-American swimmer at the University of Michigan and to compete in the Olympics. Presently he serves as the coach of Turkey’s National Swim Team and lives with his wife and sons in Istanbul. Unlike some mumps victims, he never developed an inflammation of the testicles, a known complication of mumps that can lead to sterility. Nor did he lose his hearing at a time when mumps was a major cause of deafness in children. 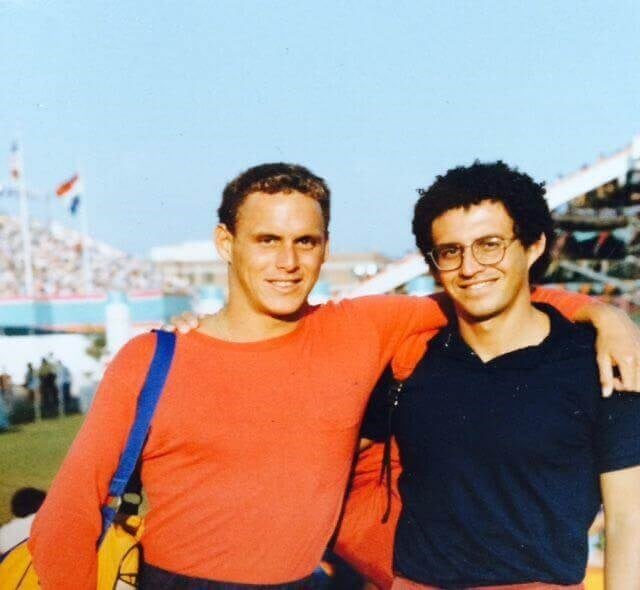 The Birth of Vaccines

Before vaccines were available, children were like pawns on a chessboard, their lives too commonly crippled or taken away by childhood diseases. If American children were still plucked from this earth by smallpox, polio, rubella, measles, and whooping cough, it’s unlikely the present anti-vaccine fervor would ever have taken hold. The vaccine story starts in the late 19th century with smallpox, a viral illness responsible for killing 10% of the British population. Those who survived were marked for life with disfiguring scars and sometimes blindness. In 1796, having seen too many smallpox deaths, Edward Jenner, an English physician working in the countryside, decided to try out an idea. Local lore held that milkmaids who became infected with cowpox, a mild illness, were protected against contracting smallpox. One day Dr. Jenner took the substance from the lesion of an infected milkmaid and rubbed it into open scratches on another person’s arm. That person was his gardener’s eight-year-old son, James Phipps. James developed cowpox and recovered. That was the easy part. The real test lay ahead. Finding someone sick with smallpox, Jenner harvested material from a papule and rubbed it into James’s skin. If Jenner’s hunch was wrong, the boy was likely to die. But James never got sick. The immunization worked, and that was the beginning of the end of smallpox. Thanks to global smallpox vaccinations, in 1980, the World Health Organization declared the disease vanquished. In honor of the animals who played a starring role in saving lives, Jenner borrowed the Latin word for cow, vacca, and created the words vaccine and vaccination. As other vaccines were introduced by the late 20th century, devastating childhood diseases became nearly unknown in the United States, and more children survived their childhoods.

Flash forward to 1998 to an article published by Dr. Andrew Wakefield in the venerable British medical journal, The Lancet. In his study of twelve children, Wakefield correlated autism with MMR vaccinations. The results had a profound effect. In an attempt to protect their children from autism, parents increasingly refused to get their children vaccinated, relying instead on protection from other children’s vaccinations. As long as 90 to 95% of the population were vaccinated, the unvaccinated few were protected by herd immunity. But the article was based on lies. After an investigation showed that Dr. Wakefield had falsified the medical histories of the children, The Lancet retracted the article in 2010. That wasn’t all. A law firm intending to sue vaccine manufacturers needed evidence linking vaccines with autism, and they had nothing. Without that link, they had no case. So they bought the evidence. In exchange for $675,000, Wakefield altered the children’s medical history to create the evidence. In 2010, Britain banned Dr. Wakefield from practicing medicine.

Subsequent research has shown no causation between vaccines and autism. But despite those findings, The Lancet’s retraction of the article and Dr. Wakefield’s loss of his medical license, the anti-vaccination movement continued to flourish. Unvaccinated children bore no apparent consequences thanks to herd immunity. Herd immunity protects everyone most of the time–unless an unvaccinated person is exposed to someone with, say, measles, such as the one who visited Disneyland. The highly contagious illness spread from that single visitor across several states, mainly among those who were unvaccinated. With a measles outbreak, it’s not just the unvaccinated who are at risk. Though vaccines are highly effective, a vaccinated person still has a 7% chance of contracting measles when exposed to the virus. In areas where 20 to 40% of people are unvaccinated, everyone’s risk goes up, including those who have been vaccinated. Measles is usually considered a mild illness consisting of a rash, a cough, and runny nose, but for a few the outcome can be death or permanent disability. Before the measles vaccine was available, over 400 children died of the disease in the States every year. According to the WHO, even as recently as 2013, 145,700 people died of the measles worldwide. There will always be people among the population vulnerable to childhood diseases because they can’t get vaccinated: Babies under 12 months, pregnant women, and people with compromised immune systems. Their lives depend on everyone else’s vaccinations. Just last week, California State Senator Tony Medoza, D-Artesia, introduced a bill requiring that adult daycare workers be vaccinated to protect vulnerable infants. In Pakistan, one of the few areas in the world where polio is still endemic, police arrested more than 500 parents who refused to vaccinate their children against the crippling, sometimes deadly disease. A personal decision not to vaccinate oneself or one’s children can put an entire community at risk. I wonder if that anti-vaccine mom could tell Fernando it was “healthy to get a childhood disease.” And what would she have said to Roald Dahl if he were still alive? That vaccines carry risks? They do, indeed, but compared to not getting a vaccination, that risk is infinitesimally small. Children should not have to die to prove that vaccines save lives.