Tuberous Breast Correction in Novato, CA and Has Confidence With New Look 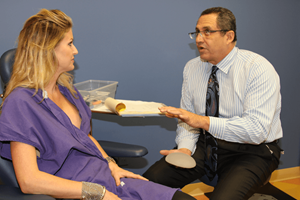 This 36 year-old Sonoma County woman sought consultation in our Marin office for correction of tuberous breasts. She had one child and was not planning any other children. She disliked the large space in between her breasts, the small size of her breasts, as well as the large areolas. She had thought about this for many years, and had seen two San Francisco plastic surgeons concerning correction of her tuberous breasts. We reviewed her goals and had a careful discussion of tuberous breasts, silicone breast implants, and donut (Benelli) mastopexy. Two years after her first consultation in our Marin office, and after consulting with several other plastic surgeons, she underwent silicone breast augmentation and a donut mastopexy. The implants were moderate profile, size 380 cc. At surgery, the lower pole of the breast was constricted as expected with tuberous breasts. The lower pole was scored diagonally, stretched to increase the lower pole dimension, the implants placed, and a donut mastopexy performed. She is absolutely thrilled with her new shape and figure. She can wear clothes and bathing suits that she never could before, and her self-confidence is great with her new look. She is shown almost 4 months after surgery.
More