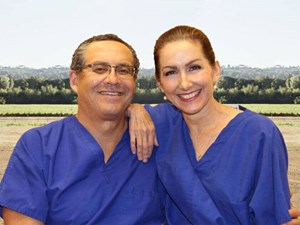 This 54 year-old woman from Mendocino County saw us in our Santa Rosa Plastic Surgery office after losing 140 pounds with gastric bypass surgery. It had been almost 2 years since her bariatric surgery and she was stable in weight. Her areas of concern were her abdomen, her saggy breasts, her saggy arms and, lastly, her thighs. After careful discussion, we outlined a plan that reflected her priorities. She initially underwent a panniculectomy in our Sonoma County plastic surgical suite to remove the excess abdominal skin left after her massive weight loss. She was thrilled with that outcome and noticed an immediate improvement in her shape and in her self-confidence. Approximately 6 months later she returned to our Santa Rosa office and had a combined brachioplasty (arm-lift) and breast lift (mastopexy). She felt her arms were very large and she also felt her breasts had dropped to her weight with the massive weigh loss. Her postoperative course was uncomplicated and she is shown 2 months after surgery. She is thrilled with the clothes she can now wear and with the appearance of both the arms and her breasts. Her scars are well healed and she is now ready for the final plastic surgery chapter, a thigh lift, which she will undergo in a few months.
More